Cool City of the Moment

Can you guess which city it is?? Our lips are sealed but there is a hint in the background of this photo... 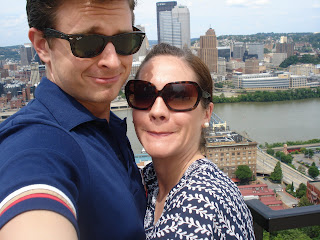 Who are we kidding? We can't keep a secret. It's Pittsburgh, USA! 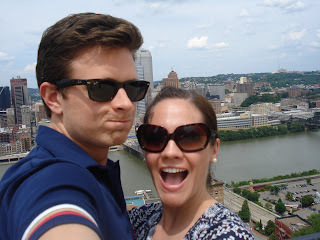 BF and I made a trip to The City of Bridges in the summer of 2008. You can tell that we like to capture our serious personalities through film. 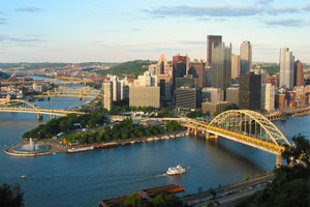 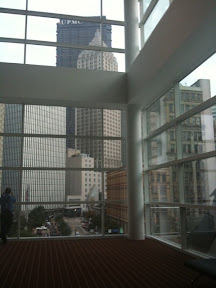 (Random view from a building I was in this week)

All I can say is, what a cool city. Pittsburgh is my home for a week and so far I'm enjoying it very much. The city is clean, has cool architecture, a great cultural arts scene and awesome scenery. It feels like New York but smaller and less overwhelming. 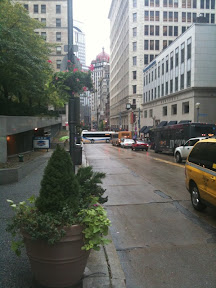 Pittsburgh is also home to the best chocolate, concocted by the Edwards family. Their shop is on the south side of the city and is called The Milk Shake Factory. Can you think of a better factory than that? Put me on the assembly line boss because I'm ready to work! Insert visual of Lucy and Ethel working on the confectionary assembly line. Or just watch it here. 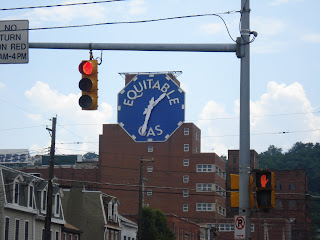 Sweet buidling on the Southeast side.
The coolest part about Pittsburgh is all of the bridges. 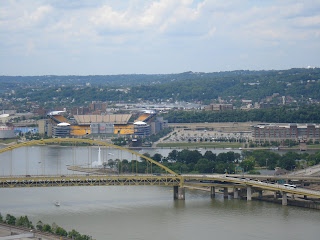 Pittsburgh is actually nicknamed, "The City of Bridges." I love bridges, almost as much as I lust over a good barn. Don't ask - or do, it's up to you. The city sits at the intersection of the Allegheny and Monongahela Rivers to form the Ohio River. Did you know that, children? These rivers are wrapped around the city creating the need for some major bridges every few hundred yards or so, there are 446 to be precise! 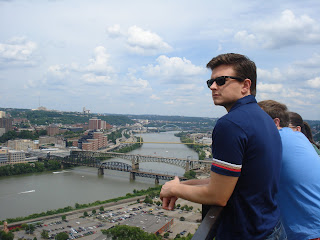 She's got Chutzpah: After the steel industry crashed in the early 1980s the city picked herself up by her bootsraps and cleaned up her act. Once black and smokey it is now quite "green." The convention center that is home to the G-20 Summit this week is one of the only LEED "green" centers of its kind. Who knew?
Pittsburgh where have you been hidig all of this time? My guess is under your Terrible Towel.

Email ThisBlogThis!Share to TwitterShare to FacebookShare to Pinterest
Labels: travel