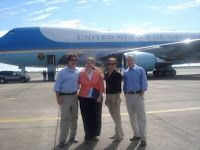 Houston team in front of AF1 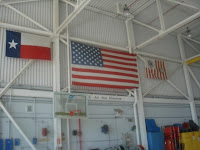 Presidential Press Advance has given me the opportunity to see some pretty neat things. My latest trip was not to an exotic location but to one that was a bit of a wreck. After hurricane Ike blew through Texas the President made a trip to meet with State and local officials to survey the damage.

I received a call from the White House on Saturday afternoon asking if I could be at Andrews Air Force Base the following morning to board a plane in support of a Presidential trip. While they didn't tell me where we would be going, it was pretty obvious. At noon on Sunday I boarded a C-17 military cargo plane. I have to say, it is the way to fly. If you can get over the fact that there are no windows, sitting strapped to the inside walls of the plane, across from a chained down semi, two Suburbans, three 15-passenger vans, and a very large generator called "Power2," than it is the flight for you! While there is no beverage service, you do have the luxury of rolling out a mat and sleeping on the floor once you reach cruising altitude. Landing is weird. 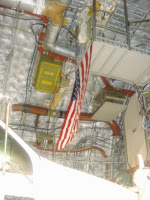 View from my seat on the plane. 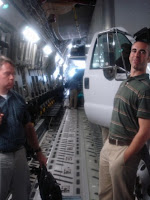 AF-1 Pilots, always the nicest guys on any trip. 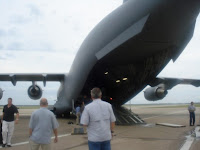 Looking up the plane's "skirt."
Once in Houston I was shocked to see what a mess the place was (after I figured out we were in Houston). Being from Tornado Alley I'm used to seeing paths of destruction but nothing like this. Everything had damage. There was no power and the lines for gasoline and water went for miles down the road. We stayed in an area that was one of the few with power so people were flocking there for meals.

This trip gave me a great appreciation for the Coast Guard who we had the honor of working with in preparation for the event. They are good people and have hard jobs. 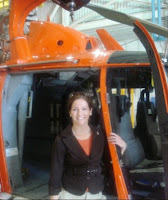 They were nice enough to let me dork around in one of their helos.

One of the craziest things that I have ever seen are two white-tops taking off with four Black Hawk helicopters taking off for an aerial tour of Galveston. So cool. And windy. 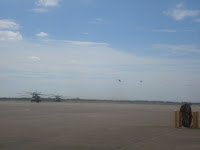 The President arrived and immediately hopped on Marine One for an aerial tour of the damage in Galveston.

We helped guard the plane while he was gone. 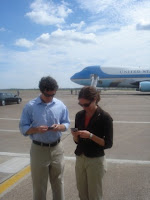 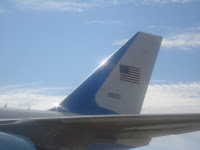 God bless everyone who lost there homes in Galveston and Houston.

Posted by Lauren No comments: