Last night I was lucky enough to be home during prime time T.V. and to see some series premieres on ABC. Allow me to give you my meager opinion on what I saw.

If you enjoyed the hilarious family dynamics of the cult comedy series Arrested Development, you're going to like this show. It is the story of today's modern family, from the view of a father's new family and his two kids' families.
The patriarch of the family is Jay, played by Ed O'Neill, formerly of "Married with Children," he is married to Gloria - a young, beautiful Colombian woman (dead wringer for Catherine Zeta-Jones) with a 10 year old, hopelessly romantic son.

Jay's daughter Claire, played by Julie Bowen from "Boston Legal," is mother to three children and wife to dorky guy Phil. Phil is a dad attempting to be his kids' friend, only making him that much more embarrassing to his children. He would describe himself as "dope." Their oldest daughter is 15 and is just like her mother was at her age. This is worrisome to mom because she was a bit of a slut at 15. Their youngest daughter is brainy and cool. Younger brother is awnry and slightly stupid.

Jay's son Mitchell, played by Jesse Tyler Ferguson from the short-lived "The Class", and his partner, Cameron recently returned from Vietnam with their newly adopted daughter, Lily. His father isn't always supportive of his gay son and his partner of 5 years. They are working on it. Jay still knocks on the door and says, "coming in" every time he enters a room where the boys might be to avoid any PDA that might be going on.
Modern Family definitely isn't a drama and is shot in that cool documentary style. You will laugh. You will enjoy it. Promise.
Some might think that the writers were trying to come up with the craziest, unrealistic family scenario possible but I don't find that to be true. Most families that I know are exactly like this family. Who doesn't agree with the deal a husband a wife make that if the dad is going to buy his son a BB gun and the son shoots someone that the dad then has to shoot his son back to teach him lesson. Now that is good parenting.
After Modern Family...
Courtney Cox Arquette's new show, "Cougar Town:" 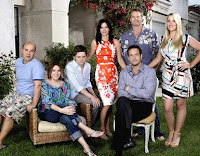 Before you judge, it was much better than I had anticipated. I was picturing "Desperate Housewives," but got something more along the lines of "I Love Lucy." Arquette plays Jules, a newly divorced 40 year old Realtor living in Cougar Town, Florida. She has a handsome and dopey ex-husband that hangs around but you don't hate him. Her character is quirky and awkward, making her lovable as opposed to being the kind of woman that people want to hide their teenage boys from. Example of awkwardness: "You're hot as balls!" she says drunkenly to a hot younger man. Awwwkward panda. (Pardon the language, Mom!)

The first episode shows Arquette becoming acclimated to being out in the dating world again and continually annoyed by her also newly single male neighbor. Eventually her young sassy assistant, played by Busy Phillips (love her! remember her in Dawson's Creek??), convinces her to go out where she meets a young stud of her own. She takes him home and then has an awkward moment with her teenage son. Thank goodness for her always lovingly judging next door neighbor/best friend Ellie, played by Christa Miller from "Scrubs" and "The Drew Carey Show."

The script is well-written, characters are interesting, funny and likable, and Arquette does a great job transitioning away from Monica Gellar. If you missed the pilot you can see it on http://www.abc.com/.
Can I just say that Courtney looks great? She does. However, she is starting to get that wide-mouth look that only comes with plastic surgery or thanks to the Steven Tyler/Joan Rivers gene pool. 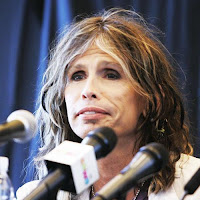 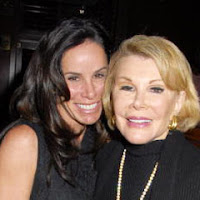 Email ThisBlogThis!Share to TwitterShare to FacebookShare to Pinterest
Labels: Review

nice reviews, we've got both of those recorded, definitely looking forward to modern family...have you seen "community"? chevy chase is back

p.s. I bet you blog will get a lot more google hits with "boob" as a post heading!