This has been a good week for food in the FOL household. It started off with Monday night not-world-famous enchiladas. So good. But I can't take full credit for them because the recipe is from America's Test Kitchen. ATS is my all time favorite spot for recipes because they tell you what can possibly go wrong and how to prevent it. Enchiladas...drool.
Tuesday night was cocktails at The Gibson. Delicious, yes. Food, no. Thank goodness for jumbo slices from the pizza place down the road. For late night jumbo in Logan Circle head to the pizza joint next door to Source Theater at 14th Street and T.
Last night was birthday night for the BF so I treated him to Marvin Fried Chicken and Waffles. Voted best in D.C. Marvin was named as a tribute to Marvin Gaye who grew up in the Shaw neighborhood. It is a super cool spot next door to the super swank Gibson. Marvin has one of the best roof top decks in D.C. and we had been anxiously waiting for the crowds to die down to check it out. We had also heard about the afore mentioned fried chicken and waffles. BF has had this southern treat at three other Washington eateries and was ready to put Marvin to the taste test. 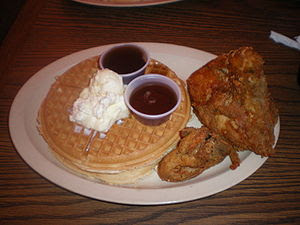 Not actual dish at Marvin, but from Wikipedia. Didn't want to be the nerd photographing my food.

Success! The fc w/ waffle comes on a bed of collard greens that are out of this world. Based on my past experiences with the wilty green leaves I was none too excited to try them out last night. But hold on to your pants because Marvin does good collard greens. None of that bitter aftertaste that you find elsewhere. This was the real deal, kiddos.
I had the apple bacon mussles served with a toothsome cyclone of "frites." Mama, it was good. Who knew a creature served in its own home could be so finger licking good? Dinner was followed up by an ambrosial apple cheddar pie served with salted caramel icecream. 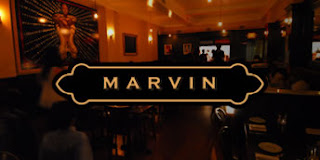 If you're in D.C. head out to Marvin at the corner of 14th and U Street. Anyone else been anywhere good lately? Anyone try a new unexpected dish this week?
Posted by Lauren

Email ThisBlogThis!Share to TwitterShare to FacebookShare to Pinterest
Labels: Food