This week my adorable parents are visiting BF and I in Port of Spain. We have had some fun already playing golf in the hills, lounging by the pool, amazing meals and taking boat rides through the swamp to see birds and wildlife. Have you ever heard of a Four-Eyed Fish?? B-Zarr.

The four-eyed fish is what you would think of as a Mudskipper, called this because they are the only fish that can actually walk. And yes, they do have four eyes. Super weird looking little bubble eyes that float at the surface of the water while they swim. 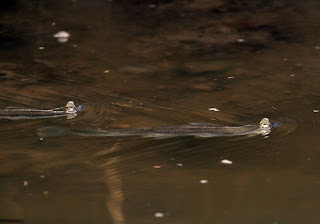 We saw these bug-eyed freaks of nature at the Caroni (pronounced Care-un-ee) Natural Bird and Wildlife Preserve, just south of Port of Spain. The preserve takes up 40 square Km and is like no swamp I have ever seen. No bugs, crazy Black, Red and White Mango trees, snakes and some amazing birds. Not just any birds though, the National bird of Trinidad, the Scarlet Ibis. 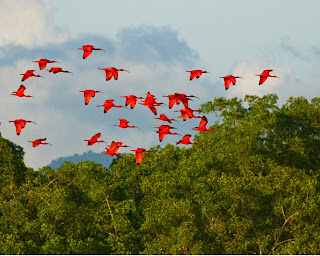 We hopped on a guided boat at 4:00 p.m. and by 5:30 we were watching an entire colony of Scarlet Ibis come into roost for the evening. 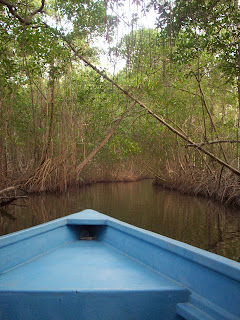 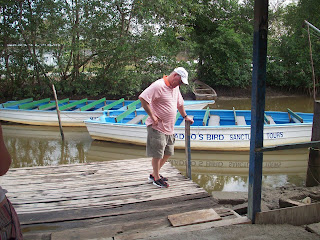 They are electric red and nearly glow they're color is so saturated. They are similar to Flamingos in the fact that they get their color from their diet. Kind of like people who eat a ton of carrots and end up being tinted a faint orange. 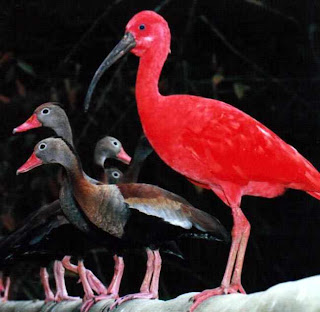 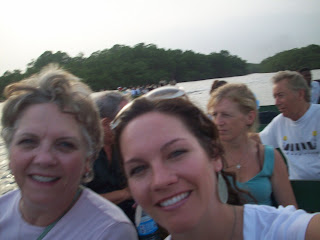 Ten points to the first person who can tell me what Muddy the Mudskipper comes from.
Posted by Lauren

Email ThisBlogThis!Share to TwitterShare to FacebookShare to Pinterest
Labels: travel

10 points! "Crawls like a dog without skinning his knees..."

I want to be red! Keep posting, sista!